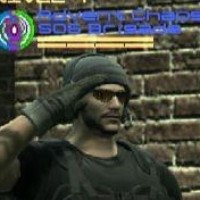 My favorite memory was when I played in a Tournament with some friends. I personally wasn't very excited to participate because I was never that good and far too often we would run into lag switchers in any of the first 3 rounds.

After a lucky first match where I was carried by my friends, I wasn't feeling too confident for the next round in Outer Outlet.
TSNE one of my favorite game modes. My clan leader told me it'd be best to equip Quick Recovery 3, but me being the little angsty shit that I was I went with CQC+3 and Scanner 3. The whole team was a little demoralized since our opponents were way above us and with me dragging the team down last game it wasn't exactly the most inspiring start having to defend. Once again me being a little shit, I disobeyed orders and instead of sticking nearby everyone I went by myself through the left. As my leader was about to yell at me to pull back, I see a floating knife from behind my cover. I swear to gods I instantly sweated buckets and in a split second decision that felt like an agonizing hour I moved in despite every feeling to run away.

I was able to grab and scan that sucker and as luck would have it they had all linked up. In that little bit of recklessness I found out two of my teammates had already been taken out, but thanks to the scan we moped up the rest with a great amount of points. I received so much praise from the Clan leader and the team that I was overwhelmed with happiness. The whole team got a morale boost and we were able to carry on through.

Elated with the possibility of winning the coveted Pink Beret we moved up to the finals. My hands were sweating and I was super nervous, the enemy team were beyond our skill level. At the time I was lvl12-14? With all the confidence in the world we headed out and to no ones surprise we lost very quickly. Neither me or my teammates were upset, we weren't cheated we were simply outmatched.

We won the the pink fleece cap. We were screaming of happiness! I had never gotten that far in a tournament, my teammates had gotten other berets, but not me. We quickly made a private room and took pictures of our pink beanies and we were just chilling and messing around.
Top

Shit man I remember my clan didn't care about GP so we'd just go to Mk2 (or whatever the non-high GP lobby was) and win basically every survival game for 4 hours each time... all that RP and good times and we still all had A or higher GP lul

Yes exactly! I had a similar feeling like that in MGO3, but that netcode made it nearly impossible to enjoy with terrible CQC. Nothing crazier than rolling the GA-KO/KEROTAN inside the goal with a drum can even though there's like 3 enemies actively trying to stop you. Better yet, grabbing the GA-KO at the very last second in RES missions!
Top

There was one time in a Prison room. There was a fully croc camo suited guy with Croc cap, and we would be allowed to leave the cell after awhile and we would do nothing but follow this guy around CRAWLING and pretending to be Crocodiles. Completely following his whole route like some kind of congo train. Times like that really made the experience better.
Focus. Control. Conviction. Resolve.
Nothing can deter you from the task at hand except your own fears.
This is your sky.
Top

Let's definitely bring back the Prison matches. I tried hosting a few today, but no one joined.
Top

Back before CQC EX was changed, when it was a one slam KO, I entered a room where people were leveling each other to get CQC upgrades with EX equipped and knocked the entire room out with ease, as there weren't any weapons and you reverse everything. Went several minutes before I got kicked, and still laugh my ass off just thinking of it.

We should try and set something up. Haven't played a prison match in 6 years and am jonesing badly. Every time I bring up the subject when on the Groznyj Grad map nobody wants to play.
Top
Post Reply
38 posts

Users browsing this forum: No registered users and 1 guest