I have heard numerous times of Dope acting in a wholly unacceptable way towards members of the community, but last night was the first time I witnessed the outright abuse first hand. As you can see in the video, Dope uses his administrative access to kick a new player from my RES room, and and then proceeds to steal his spot.

This occurred at approximately 7pm PST / 10pm EST last night. The player "Mapaun." was unable to join another room as there were only two rooms available at the time: NA RES, and a full TSNE. Because of Dope's clear abusive use of power, his actions resulted in a new player of the Revival having his spot in my room literally stolen from him and he had to quit the game for the night. As shown in the screenshot, Gen was aware of this and did nothing. Dope continued to play in my room despite the attempts to kick him and players calling him out for his actions. And then this "administrator" started team killing too. Yet he and Gen both ban players for TK'ing all the time.

Funny enough, not long after the first attempt to kick Dope for booting Mapaun off the game, Gen sends a discord message stating simply to "leave dope alone". But how does that happen? Did Dope actually command kick Mapaun, a new player, and then when he's being called out on it in-game he goes and messages Gen to deal with the problem for him? Huh. 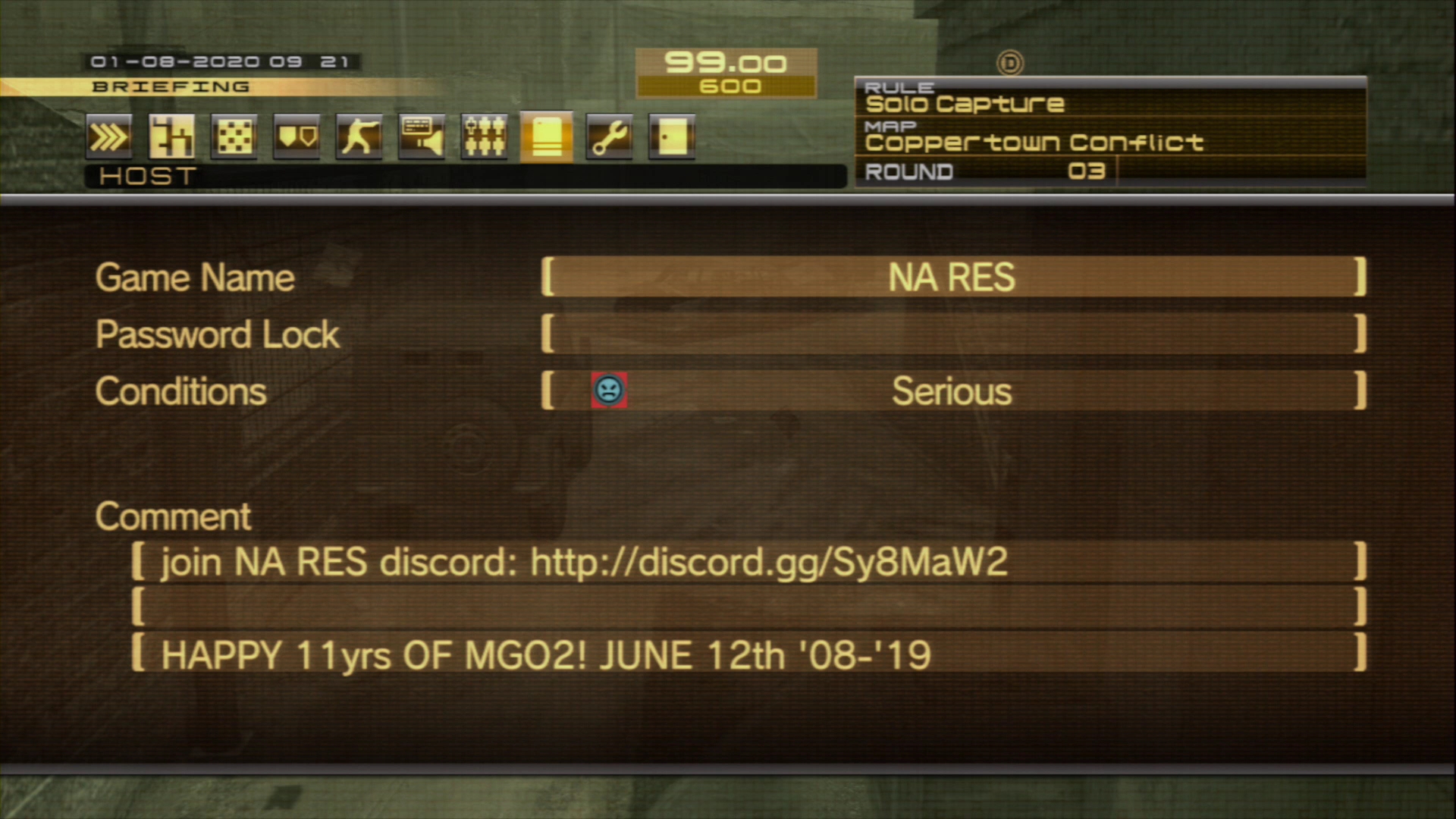 If Dope wanted to play why didn't he join the NA RES discord server and ask for a spot? The link is always in the description. What kind of administrator's first choice to join a room is to boot somebody off the game rather than join a server and request a spot from the host?

Not long after Dope joined my room, a friend of mine waited twenty minutes before he could come in and play. My friend waited because he doesn't believe he's more entitled to play than anybody else. So why does Dope think he's more entitled to play the game than anyone else? What gives Dope the right to steal a player's spot? Why does he even have administrative privileges?

Is this really the best we can do?
Last edited by president trump on Thu Jan 09, 2020 1:30 am, edited 1 time in total.
I've resigned. I am no longer involved with SaveMGO.
Top 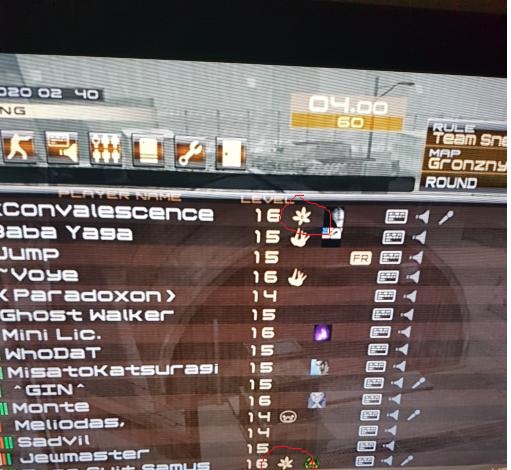 Also, why is he giving out elite soldier ranks like The Boss rank to his TSNE friends? Last I heard, the soldier ranks are supposed to be for winning tournaments, and The Boss/Big Boss ranks are for administrators only. At least, that's what Ghz has said.
I've resigned. I am no longer involved with SaveMGO.
Top

The SaveMGO community deserves better than this. In 2018 we saw the ejection of Mumra and Lady Viper for administrative abuse. Now going forward in 2020, we're right on course for the community to continue experiencing the same shit as before. This isn't the first time Dope has abused his privileges to get into a room, and make no mistake, by booting new players from the game and preventing them from playing, Dope is responsible for the declination of the player base and the ultimate death of SaveMGO. The exact opposite of what an administrator's job is to do.

An administrator should be putting the community first, meaning ahead of his own playing. An administrator should be: respectful, trustworthy, patient, competent, and most of all, professional. Does any of that sound like Dope? Is he respectful? No. Would he take a break from playing just to help you set up your MGO2R installation over Teamviewer? No. Would you trust Dope with your Game ID and password? Oh, please. You can't even trust him to be on the game at the same time as you.

Dope is an absolute disgrace to the SaveMGO team, and our community. Anybody that fails to see how he is hurting the game needs to wake up and check the games page. He's banning players for frivolous team kills (yet he will team kill players himself) and he's booting new players from rooms when there's barely 30 players online.

Harassment, Toxicity, and DDoS
Serious harassment and/or intentionally ruining the game for others will not be tolerated.
Threatening to release another's personal information, or DDoS a person and/or group will result in a permanent ban.
Trash talk is fine, but personal threats or harassment is not. Any reports should be serious, someone saying you suck at TSNE is not serious.
Going into rooms just to fuck with people isn't either.

Do these rules not apply to administrators? Because he's intentionally ruining the game for others. Why does the SaveMGO community have to put up with this kind of garbage? There are plenty of better candidates that I would personally vouch for that would not abuse their privileges. To name but a few upstanding members of our community that I would recommend for a moderator, or an administrative position: Killerratchet, Meepy, STONE, Gilly, iPlayNaked, and Solid007. These players have all individually shown both dedication and passion for this game and it's community for many years; that's more than can be said about Dope.
I've resigned. I am no longer involved with SaveMGO.
Top

Trump I completely agree with everything you are saying. I know that doesn't mean much coming from me because you never thought I should be an admin in the first place either, but enough is enough. Dope has been abusing his admin powers since the day he got them.

I will admit that I also command kicked a few people here and there in my day but nothing on the scale of this. After a few years of seeing a therapist I've finally reached a point where I won't lash out at random community members over trivial things. This Dope character on the other hand will kick scores of players up to 30 times a day. Baits people into CQCing him so he can TK them, then bans them for Team Killing, lying to the administration and community at large. He is a menace.

If it were up to me he would not only lose his Adminship but also be banned one day for every player he's kicked since becoming Admin.
Top

All those moments will be lost in time, like tears... in rain. Time to die...🕊
Top

I was able to reach out to Mapaun today and explain the situation. Mapaun remembers the abrupt disconnection from the server he had while we were playing, and since he is indeed new, he did not understand what exactly had happened at the time. Mapaun now knows an administrator intentionally booted him from the server just to take his spot in the RES room.

Unfortunately, although I could explain to him what happened, I was unable to provide him with assurances that it wouldn't happen again. That's because, as of writing this, Ghz has most likely not yet taken disciplinary action against Dope at this time. I know this because during RES today, we spotted this: 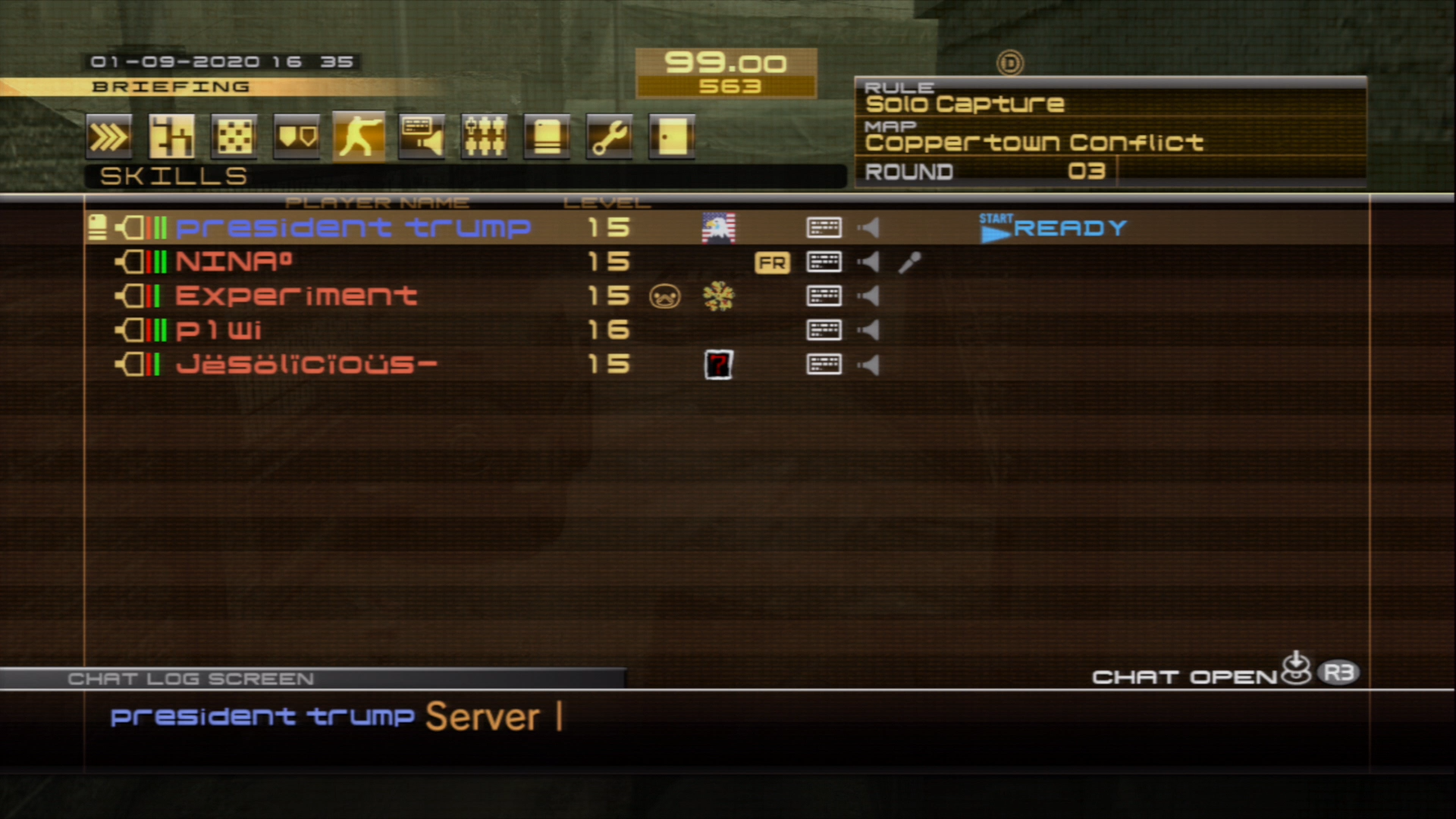 Since we're at the briefing I'll have to explain what a blank global server message means. 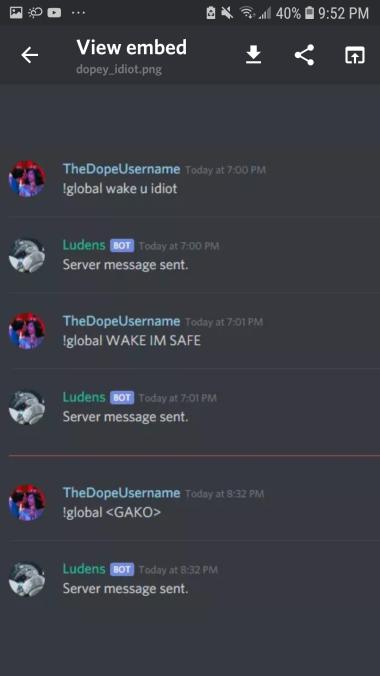 This means that Dope, who was playing TSNE at the time, was sending the <SONG>* codec command server-wide. Thereby causing all players in a match on the server to sing, meaning he would be able to pinpoint enemy locations (or expose his own team). He's literally exploiting administrative commands for his own benefit, and to gain an advantage over other players. Never mind the fact that this may have disrupted several other rooms, including the NA RES room, if it were to happen at a critical moment in the game. 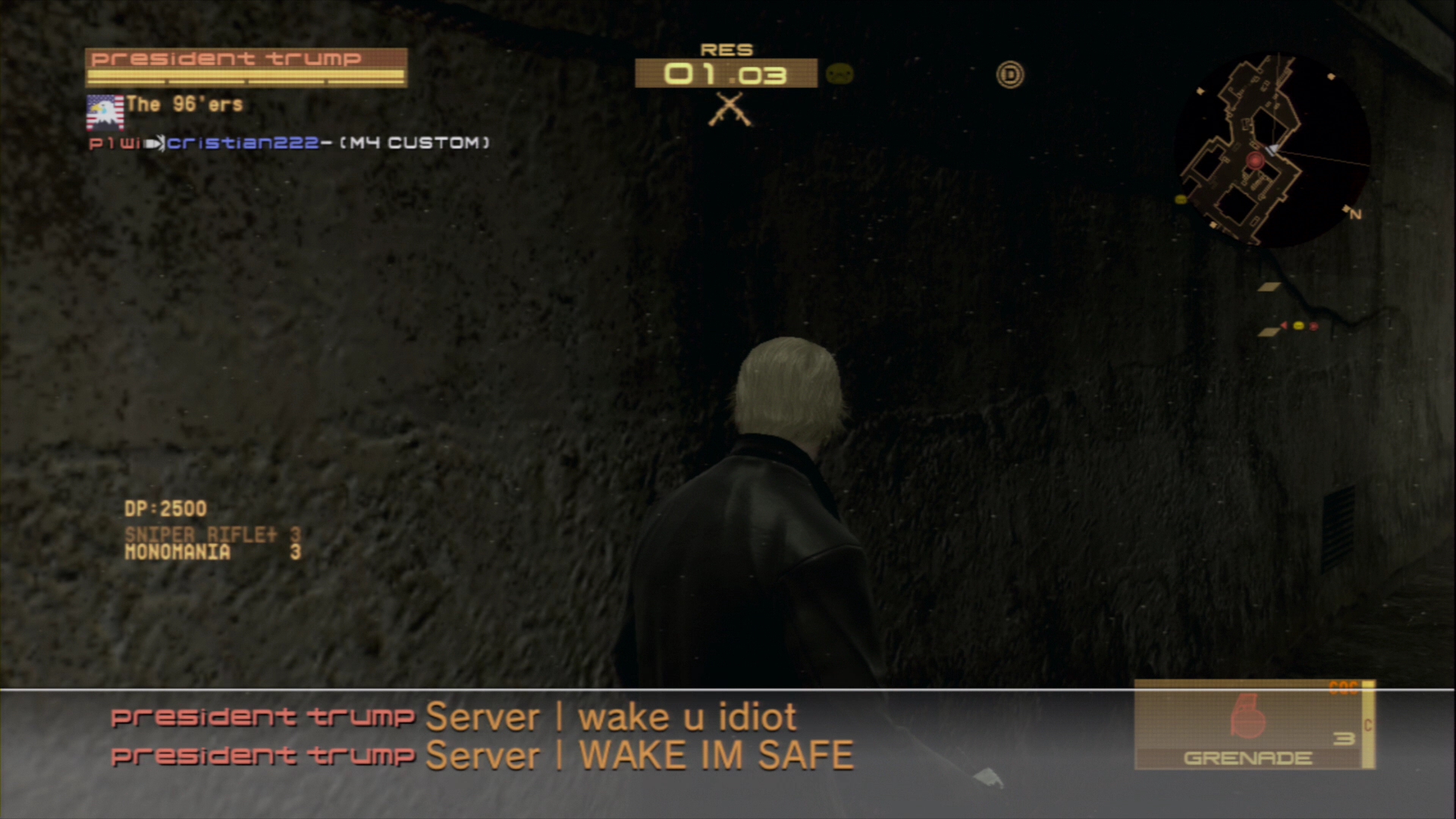 In the above picture here, you can see him using the global server message command to communicate with his team while he's asleep. This is another blatant example of Dope's exploitation of admin functions. He's gaining an unfair advantage and disrupting the experience of everybody playing, in the same room or not. 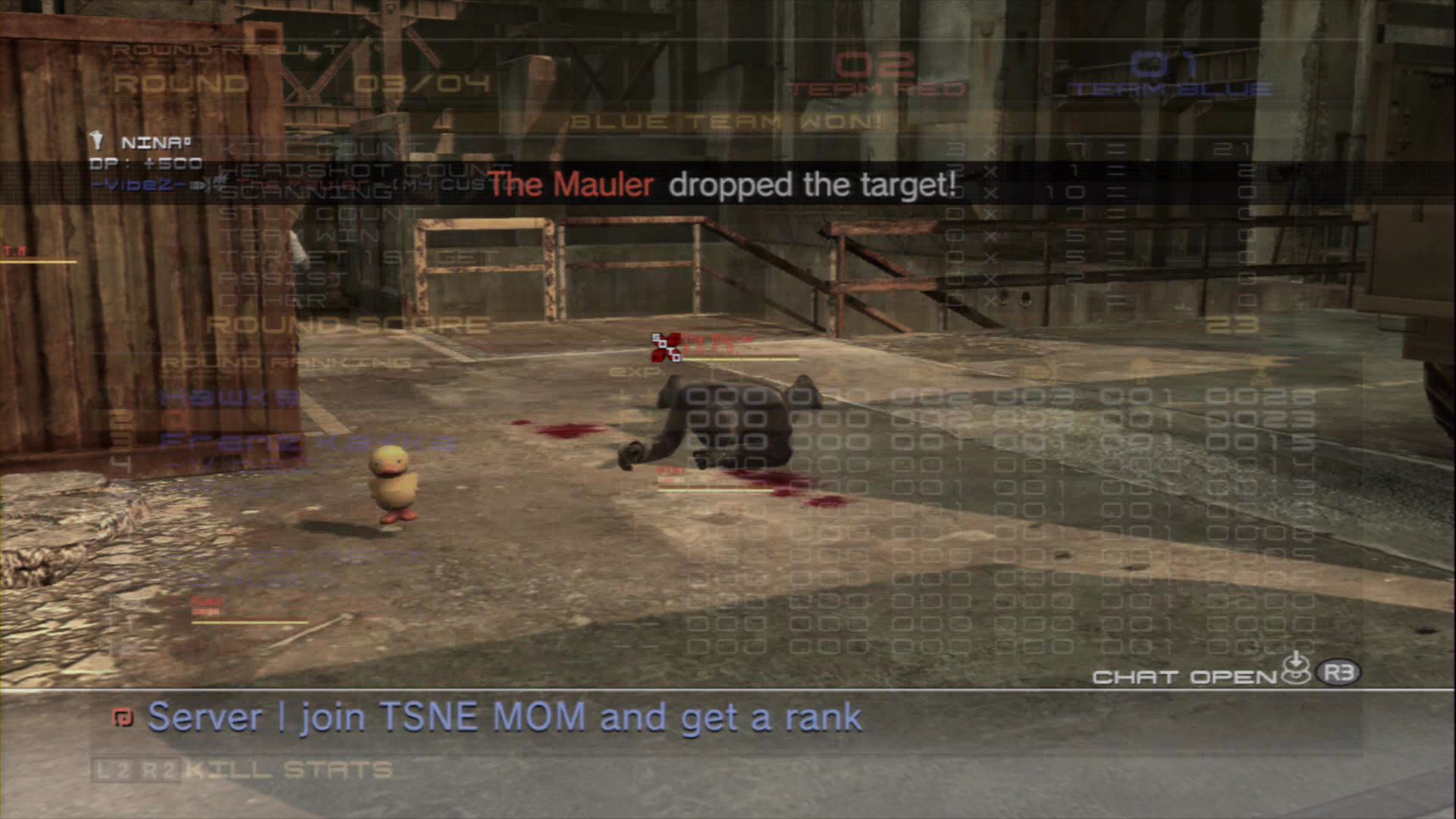 But hey, join his friend's room and at least you get a free rank, right? 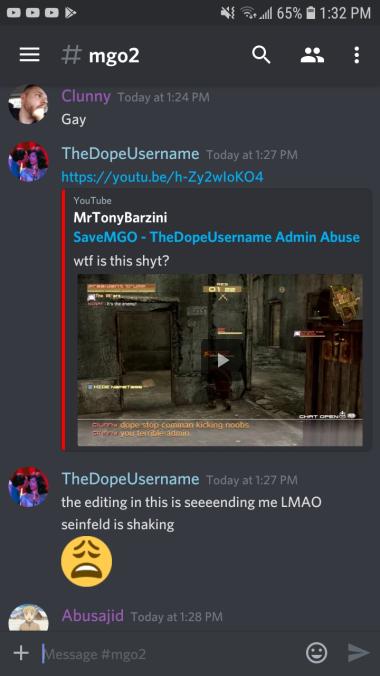 He laughs, arrogantly.
Last edited by president trump on Fri Jan 10, 2020 3:12 am, edited 1 time in total.
I've resigned. I am no longer involved with SaveMGO.
Top

Hi, I'm Mapuan, the guy who got command kicked.
Even though I just started playing this game a month ago, it doesn't seem fair that someone abuses his privileges like this and it really sucks cause I couldnt play that day and just had to switch to other game, and this isn't about me, I'm talking about how toxic and harmful this can be for an online community, again, this is not about me having my night ruined.
At first I was confused cause it said I got logged out, but then someone explained what happened to me.
I stopped playing Grand Theft Auto 4 online and Red Dead Redemption online because of the modders who abused their "power" (teleport, invincibility, freeze console) and did what they wanted to everyone and we couldnt and still cant do anything about it, and the online servers of those games are basically dead because of those TROLL MODDERS and the people who just wanted to have fun felt HELPLESS.
It kinda felt the same when GM_Dope did what he did, anyways, I hope you guys know whats best for the player base. Peace out.

Jan 9th UPDATE: That singing thing happened to me a lot, I thought there was something wrong with my character lol
Top

Hi, I'm just going to be completely honest about admins on this server I believe admins apart from GHz and a set few have always gone over and beyond there rights as admins sometimes but they have also done some stuff for the community too (I'm not hating on then just bring honest) I believe it's ok to CMD kick someone out of your OWN read OWN host even though it's bad but hosts nowadays kick anyway for spots for friends. However I don't think it's right to ruin someone night who just got the game to play. They may be classified as "No ones" please don't take any offence mupan I was a no one too before but I just don't think it's right to server kick someone out of a host that's not yours so you can play this is completely wrong. We need the community to strive. I also don't like how I got rat rank

I received it for aborting but I know others who do it all the time and dont get shit for it I honestly don't care about some ppl having better ranks I think they should just make ranks public so you can choose what you want again I think that will stop ppl from crying about admin friends having certain ranks etc it's revival it's dead let the people choose the ranks they want. No one is gonna play tournaments anymore for ranks we tried a lot but no one cares about them anymore even if you strip them all. Thanks for reading. Ps dope isn't the only admin that does this
Last edited by Ibrahim on Fri Jan 10, 2020 5:46 am, edited 1 time in total.
Top